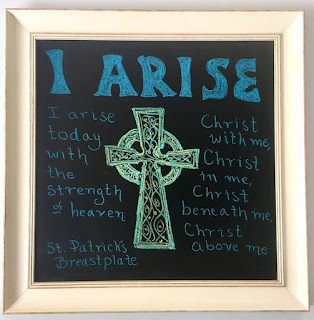 Like me, you've probably seen plenty of social media posts about friends  choosing their "one word" for the year.

I chose ARISE because I want to encourage myself to rise up and overcome the many challenges in my life. Last year's word FOCUS ended up putting me on the path of going back to work part-time and starting seminary full-time after 26 years of home schooling. This is in addition to caring for my five remaining teen/adult kids at home (though they are pretty self-sufficient), trying to keep the house clean, and coping with multiple physical disabilities.

It's sometimes hard for me to get up in the morning, so ARISE takes on the literal meaning every day. But it's not just that. It is more a sense of empowerment for myself as a an ezer-woman in God's eyes. Rising from a religious paradigm where women had no voice and no choice about so much of their lives, to one where they do, well, that was quite a switch for this 55 year old mama of 10. Then, building on that, attending an egalitarian seminary (Asbury Orlando campus) has been so much of a breath of fresh air for me! I still wonder what I'll end up doing, how I'll rise up and find my way in ministry in the community. It's a walk of faith from first to last, as it has been for the past 42 years since I first embraced the gospel of Christ for myself.

One of my classes, Church History I, delved into Celtic Christianity toward the end of the semester. I'm smitten. Starting in medieval Ireland and spreading throughout the British Isles and western Europe, Celtic Christians nourished an abiding devotion to God, deep spirituality and worship, and a love for creation, beauty, the arts, adventure, and yes, empowered women! What more could I ask? I've ordered a few different Celtic Christianity books from Amazon:


Then there is the Celtic prayer St. Patrick's Breastplate (see chalk art at top of this post), which starts with the words "I arise in the strength of heaven..." I also created a photo calendar for 2019 with Celtic prayers and blessings and some of my flower photos from last year. Here is my October page with more "arise" inspiration. 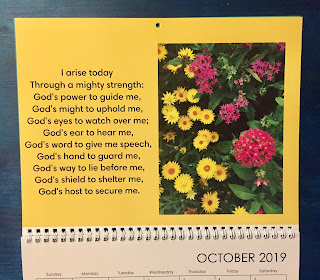 A little more story that puts me in awe of God...

My friend Patricia, who started me on my seminary journey, decided last month she wanted to visit the church where her friend and former Asbury classmate Tom Phillips, is the pastor. Church of the Incarnation is an Episcopal congregation. I decided to show up that morning too, and we've been going ever since. I love the old liturgy mixed with contemporary worship music. (Church History class also gave me a fondness for weekly Eucharist, which our professor Dr. Chilcote served each week in the style of whatever ecclesiastical period we were studying that week.) Anyway, on Epiphany Sunday this past week Father Tom's sermon at Incarnation was, of course, about the magi (also known as the wise men or the Three Kings) traveling to visit the infant Jesus. Of course we sang the carol, "We Three Kings"! To my delight, the Old Testament reading was Isaiah 60:1-6, which starts with "Arise, shine; for your light has come..." (I already had that loaded in my Bible app, because I had just looked it up.) Reading further in the passage, I see the prophecy about the nations and kings following the light to the messiah, bringing gold and frankincense. Mind-blowing! I had never made that connection before!

You can watch Father Tom's Epiphany sermon on this passage here on Facebook. So encouraging! The people of God radiate the brightness of God to the nations, drawing them to the good news of Jesus. It's not bootstrap moralism, but being filled up with God! I'm listening to it again right now: "When your heart settles into the radical truth of the grace of God... you wear the very perfection of Jesus, then your heart starts to shine with the radiating grace... and your neighbors see it."

ARISE, shine! Your light has come! The glory of the Lord has risen upon you!

P.P.S. I'm actually writing three blog posts today, which is notable since I sometimes go months without writing any. The others are Inductive Bible Study on Discipleship in Matthew 8-9 (Seminary Notes) and A Simple Woman's Day Book post which I haven't done yet. Little bit of overlap here, but I just had to include a Francesca Battistelli's "The Breakup Song" (Fear You Don't Own Me) in both this one and the Day Book post. It will help me ARISE!

Posted by Virginia Knowles at 4:48 PM No comments: