"The Freedom to Make Mistakes" (Grace Based Parenting by Tim Kimmel)

So yeah, it's been well over two years since I started this Reflections on Grace Based Parenting series based on Tim Kimmel's book, and a year and a half since the last post on it. Now it's finally time to finish up so I can pass along the book to one of my daughters who is expecting her first baby this spring.  I already gave a copy to her older sister, who has two little boys already.  It’s funny to be well into the grandparenting years while still parenting young ones of my own at home.

The final two chapters are “The Freedom to Make Mistakes” and “Evening Grace.”   Trust me, in 26 years of mothering, I’ve made a boatload of mistakes!  So glad for grace to change and move on! Here are some of the quotes from these chapters which are most helpful to me:

“Parents who embrace grace make their homes a safe place for average kids to develop into extraordinary people.  In these types of homes, weaknesses and inadequacies aren’t a big deal.  These families are overseen by shrewd mothers and fathers who see their children’s fragile features as opportunities for God’s power to shine through them.  They also know that giving their children a safe place to work through their vulnerabilities keeps these shortomcings from getting in the way of their true greatness.”

“If anything, grace should motivate you to a higher holiness.  Grace-based homes aren’t places where family members assume they can say whatever they want, see whatever they want, hear whatever they want, taste or drink whatever they want, or touch whatever they want.  That’s not grace.  That’s someone wanting to live his or her own life with no regard for what God has said or what He thinks.  But when grace is in place, there is clearly a different attitude toward sin in homes without grace…. People who walk by faith are far more capable of developing a godly and righteous lifestyle because they are finding their power for living in their personal relationship with the Lord.”

“A grace response to your children’s sin is to avoid condemnation.  You can evaluate their wrong actions, discuss their negative effects, and even voice the pain and disappointment that you have experienced as a result of it.  But you don’t want to condemn.  Condemnation corners them and doesn’t offer much hope.  Condemnation attacks their character rather than addresses their behavior.  When you condemn, it causes a reflex within them to defend themselves.  Often your condemnation oes little more than to make a bad situation far worse.”

“Providing consequences for sin is a loving form of grace.  It says, “I love you too much to let you continue in this pattern and grow up to be bad.” Meting out fair and consistent consequences for their negative actions tells children there is a mature and decent parent overseeing their lives.  Letting them get away with sin says just the opposite.  It tells them they have an immature parent who is more concerned about their comfort than with their children’s dignity.”

“You have been singled out to do a favor for God.  He is asking you to be His representative to a small but vital part of the next generation.  He needs someone to be His voice, His arms, and His heart. He chose you.”

I’m glad I read these chapters tonight.  They are good reminders for me.  A lot has happened in our family since I started the series.  There have been some really tough circumstances and hard decisions, as well as some positive progress and sweet memories.  Looking back and looking forward, I know that I need to be more consistently proactive in my mothering to help my kids deal with the complexities of life.  I have swung the pendulum from severe to lax, and need to find my middle rhythm in grace.

I sat down with my five younger kids for about 15 minutes this evening – nothing long and drawn out. I read to them Ephesians 2:1-10 (grace of course!) and then chatted for a little bit about asking God to help us grow spiritually so that we want to do the right thing from the heart.  We also talked about some of the ways we need to pull it together as a family in the areas of responsibility around the house.  I tried to keep our family meeting light and sweet, and I think I got through to them at least a little bit!   We need to do this more often.  I’ll also give them a detailed list of reasonable expectations about chores, meals, use of electronics, etc.  I’ll tweak it based on this evening’s discussion and give it to them soon.  They did get to choose the days they wanted to do dishes.  A little choice goes a long way toward cooperation.

How about you?  How do you embrace grace in your home? I’d love to see your comments.  If you’re a blogger or you’ve found something good about parenting on the Internet, feel free to link related posts!

My previous posts in this Reflections on Grace Based Parenting series are:

Posted by Virginia Knowles at 11:32 PM No comments: 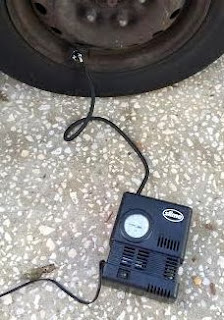 My friend Patty called yesterday.  "Do you want some bagels and flat bread?  I just got a whole bunch on clearance at the bakery outlet!"  Ever thoughtful, this old friend of mine!  She's been on Cru ministry staff, along with her husband, for most of her adult life. I've known her for nearly 20 years, and she's always been so full of grace and generosity.  I hadn't seen her in a while, but we keep in touch by e-mail and Facebook.

So Patty stopped by, and knowing she didn't come just to drop off some bread, I suggested we take a long stroll around my neighborhood and catch up in person.  Unfortunately, while we were gone, her tire went flat in my driveway. Completely unruffled, she opened her trunk, pulled out her little electric air pump, and plugged it into the car's lighter.  PSSSSH!   Little by little the tire regained its roundness.  Slow going, but "Slow and steady wins the race!" as the tortoise well knew. I thought that pump was really nifty and told her I'd have to get one since they're only about $25.

As we continued to talk, Patty hit the off button and pulled out the pump nozzle.  But the tire was still pretty flat! She smiled.  She'd had a bright idea that I didn't know about.  Yep, that's right.  She wanted me to learn how to pump up a tire from start to finish. Not just watch her, but DO it myself!  So I did.  Check the PSI number on the tire to find the proper air pressure so I wouldn't over-inflate it.  Put the nozzle on the tire and flip the clamp lever.  Plug it in to the car.  Flip the on switch. Watch the dial until it reaches the PSI.  Turn it off and take the nozzle off the tire.  The whole works.  I am now an empowered woman.

Patty explained to me that since her husband is very often out of the country on mission trips, she's had to learn to do a lot of things for herself.  It keeps her from getting too frazzled.  Because we're both philosophical chicks, we started musing about the metaphor of the tire pump and the PSI number.  How do we find the proper pressure in our lives?  Without air in our tires, we can't roll, but when does the pressure get too much and threaten a blow out?  When are we taking on more than we can handle?  When do we need to learn to back off and let it go?  Or conversely, when do we need more air, more pressure?  When do we need to step it up and take charge and make it happen?  Good questions!

For Patty, this means there are certain ministry settings where she does not thrive.  She knows what she can do and what she can't.  It means finding emotional support from others when things get a bit much.  It means accepting herself for who she is, rather than comparing to others who seem to have it all together. It means being resourceful, and finding ways to do practical things by herself and for herself.

In my own life, I find myself stressing about things I can't control while overlooking other problems that I should at least try to solve.  I have to know when to walk by and when to dig in.  I have to set boundaries and form reasonable expectations for myself and others. And I've had to learn to do a lot of things for myself rather than expecting others to do them for me.  I visit a Christian counselor.  I have a wonderful, supportive church and friends and family who check in on me and pray for me.  I read a variety of blogs that help me both think and do things that will improve life at home and at work.  I write in my journal or call a friend.  I tackle a mess or close a door.  I set goals and make a To Do list to motivate myself to action.  At age 50, I don't have all the pep I did when I first met Patty, but slow and steady wins the race, right?

How about you?  How do you find the proper pressure in your life?  What is your part to play, and what is not?